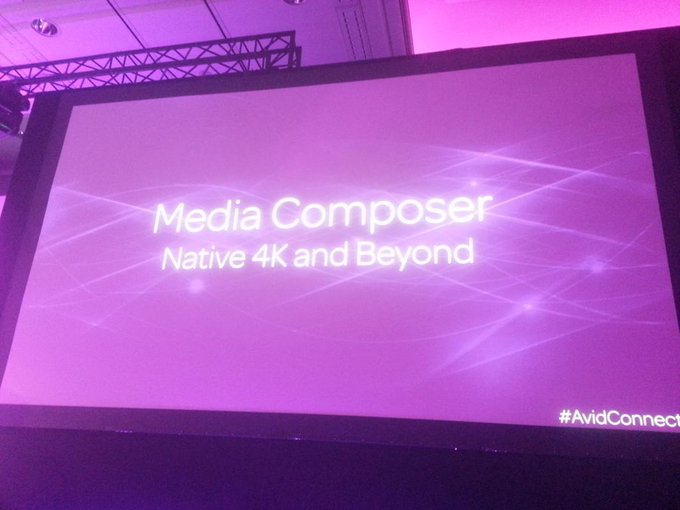 That's 4K and beyond ... plus some background rendering and other stuff

Over in Amsterdam Avid held their most recent Avid Connect event and we finally got the Avid Media Composer news that many have been waiting for - resolution independence is coming to Media Composer. This wasn?t totally unexpected as it has been hinted at for some time but this was the official announcement with this new version hitting in Q4 2014. And we?ll get Avid DNxHR - ?4K beauty without the bandwidth.?

Before we go any further a thank you to Wim Van den Broeck for all the good coverage from the event. UPDATE: Wim's Avid Blogs post is up with more info! And here's another one from Wim where he's got a couple of Instragram videos of the new version in action. I'm embeded them below.

I hope that first bullet means there will be an easy and efficient way to take an entire project full of many bins of beyond HD media and tell Media Composer to transcode it all down to a smaller offline resolution. Even with background transcoding doing it to a whole project with many bins can be a pain. If there?s one thing that Final Cut Pro X has right it?s the ease of switching between Proxy and Native editing. Media Composer has always had a Relink option to move between low rez and hi rez editing but it?s a clunky process and doesn?t work unless you have all your settings just right ? which can take some trial and error. UPDATE: From Wim's blog post it sounds llike we'll get a new thing called a Proxy Timeline which might be the easy low rez / hi rez workflow we've been looking for. read more...